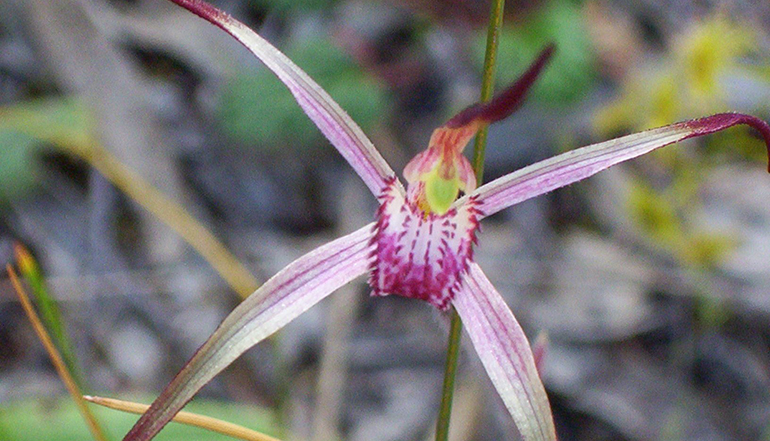 This may not be the first time you have heard a story like this – our climate wrecking havoc on the simple, yet beautiful gifts that nature presents to us. It does further underscore how our insatiable appetite for energy and in particular, fossil fuel stands to threaten more and more of our environment.

The Spider Orchid, with its large outstretched spike-like flower petals is in jeopardy. Why? Well, sex and climate change is the answer. The flower, which is typically abundant in England and Western Australia, but is also found in other parts of the world, has a floral scent that wafts into the air and resembles the scent of a virgin female mining bee, which tricks the male bees into attempting intercourse with the flower thus pollinating it. Unfortunately, research now shows that this sexual process is in decline due to climate change.

The research, published in the Botanical Journal of Linnean Society, explains that under normal circumstances, the pollination occurs when the female mining bee has not emerged from hibernation. However, warmer springs are causing the spider orchid to flower earlier in the season and climate warming is also causing the female bee to come out of hibernation earlier. Of course, this means the female bee is cutting off the orchid’s ability to trick the male bees.

According to The Guardian news outlet, Ecology experts at the University of Sussex have reported noticing changes in flowering times during a 32 year period of studying orchids. They have seen a drastic decline in the number of rare orchids and warn that the Spider Orchid could become extinct in England. Botanical enthusiasts and ecology specialists are now looking for ways to save the Spider Orchid.

This flower dilemma has opened up more questions. For instance, could there be a lot of other undocumented cases where there are climate change impacts on different species?