Sparta May Soon Have Its Own Friendly Ghost: CASPR – Disinfecting Indoor 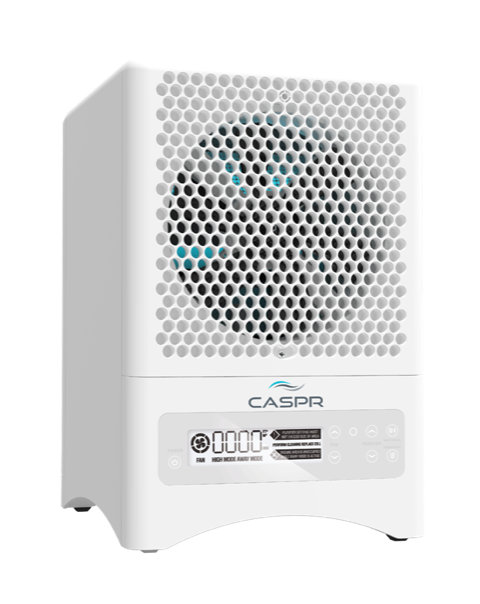 Casper the Friendly Ghost is a hero of the animated cartoon series of the same name. He is outgoing, cordial, and reliable. The character was featured in over 50 cartoons made between 1945 and 1959. However, there have been several updated versions over the years. Fast forward to 2021 and Sparta Group is close to distributing a reliable CASPR™ that can come to the rescue of business owners. The difference is that it’s not a fictional character; it’s real technology, and as you can see, spelled differently. CASPR stands for Continuous Air and Surface Pathogen Reduction™.

The CASPR™ technology allows for continuous reduction of viruses and other harmful pathogens in the air and on surfaces; including surfaces in forced-air ventilation systems. Just like Casper the Friendly Ghost, CASPR™ the technology is focused on protecting people.

“When the COVID-19 crisis first began, we started talking with scientists, engineers, and ventilation experts and discovered just how quickly this deadly virus could spread indoors. We immediately put a team together to search out technology that would address this concern,” said Sparta Group President and Chief Technology Officer, John O’Bireck.

CASPR™ stood out to Sparta Group because it offers more than one approach. It includes Plug-in technology and in-Duct technology. CASPR™ works with ambient air in your environment and creates oxidizing molecules to safely neutralize pathogens, helping keep people safe indoors.

On May 20, 2021, Sparta announced that the company signed an ‘MOU” with CASPR Group located in Addison Texas. The Memorandum of Understanding is to formalize an exclusive distribution and development agreement for the North American transportation sector.

Scientists are constantly trying to get the word out about aerosols. They argue that they behave differently than liquid droplets. Aerosols are tiny particles that float a greater distance than 6 feet, they attach to dust, and linger in the air for hours. The experts point out that aerosols travel on air currents, which means a poorly ventilated room could lead to multiple infections in a short period of time.

Prominent Canadian epidemiologist, David Fisman and other distinguished researchers published a paper in the Lancet that suggests aerosols do much of the heavy spreading in essential workplaces and that ventilation is a key factor that should be addressed. Korean researchers have been quoted in the Journal of Infectious Diseases saying, “Aerosol transmission indoors with insufficient ventilation needs to be appreciated.” In one Korean call centre nearly half of the 216-member workforce on an entire floor became infected, as pointed out by the Lancet paper. This is not the only example. In China, one passenger infected eight of 49 people on a tour bus – and on April 4, Toronto workplaces were completely shut down due to outbreaks, while another five were partially closed. Of course, by now many people are aware of the 600 infected workers that forced a shutdown at a Peel Region Amazon warehouse in March.

Scientists have explained that transmission of the coronavirus doesn’t happen as frequently outdoor as it does indoor because wind disperses and dilutes the aerosols. Also, ultraviolet radiation can zap the particles. It is interesting to note that scientists are now telling us that most PPE is designed to block out droplets but not aerosols, which could account for those who contracted the virus working indoor wearing lower quality masks.

Taiwan has been praised for its effective COVID-19 response. They’ve had just under 500 cases of the virus and seven deaths among a population of close to 24 million. I point this out because Taiwan focused on protection against aerosol transmission from the very beginning of the pandemic. Japanese authorities also recognized the threat of aerosols early on and have had about half the number of deaths as Canada has reported.

With aerosols advancing the SARS-CoV-2 (coronavirus) and the rise of variants continuing, indoor air quality will remain a key issue for many business sectors, including the trucking industry.